3.) The school laws for coates are completely different then they are for rose for rose it was different because he went a catholic school and everything had to be a certain  way and if you messed up you got whipped or like in gym class he would get beat by his gym teacher with a paddle and also got thrown against a wall. As for coates he would have to worry about not getting beat up or stabbed or shot at school and if you got on someone’s bad side they would find you after school and beat you.

question two. When Rose is talking about his neighborhood he is stating how poor it is and when he moved in it was really sketchy.  He says “a city that was warm, verdant, vast, and indifferent as a starlet in a sports car.” He is trying to say that it’s just a bunch of people trying to live the California life style of big money, nice cars, nice cars, and everything in life. in comparison to coates life is a big difference in coates town of Baltimore it is always sketchy and has a lot of crime and its always gun violence and stuff like that and where he went had a little of it but not as much as coates.

3.  when he says that he means all that is a nice fairy tale like its a good dream to think that life is all sunshine and happiness and then he realized that the world is nothing like everyone says and when he found those people he realized the world is really messed up. 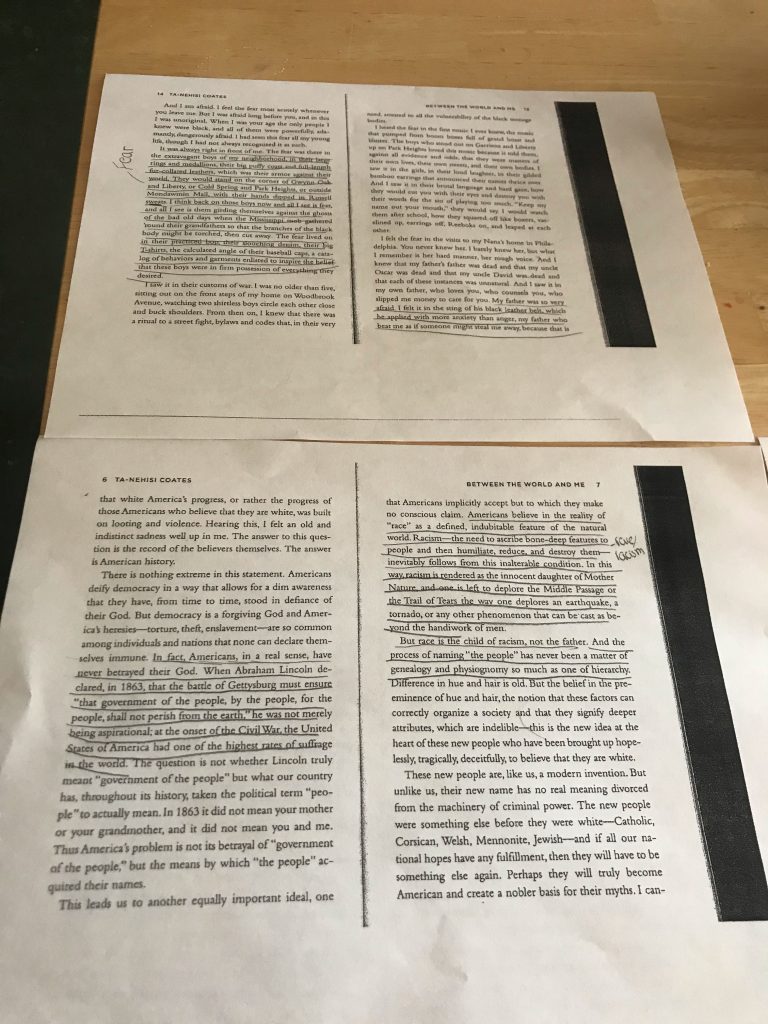 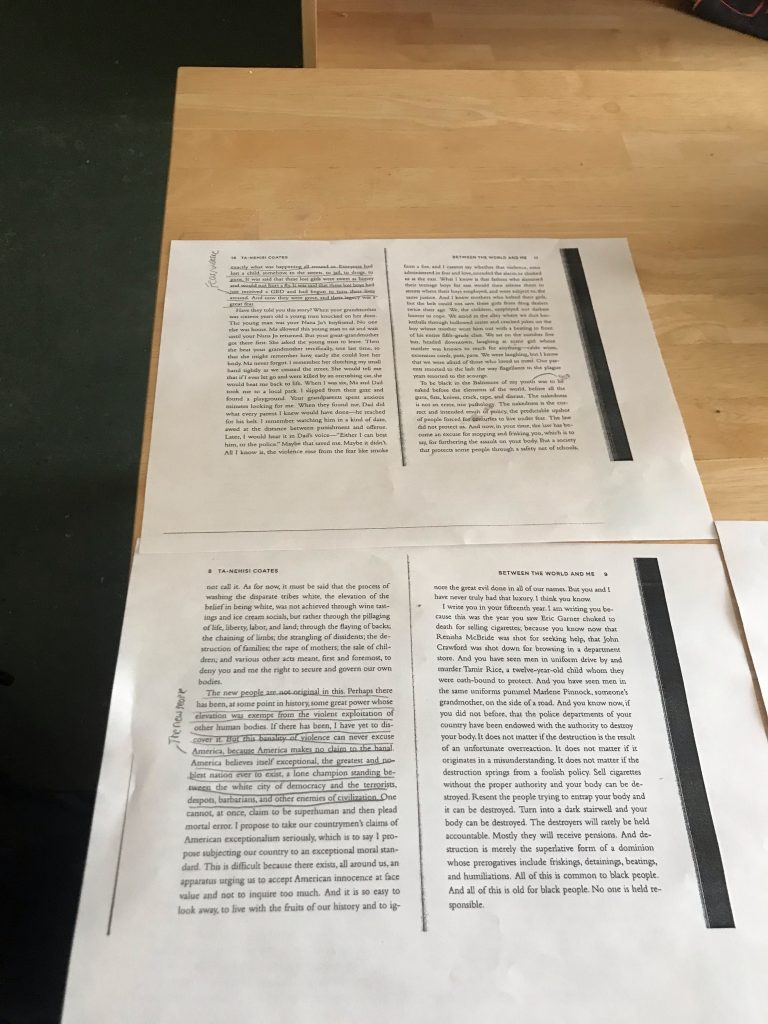 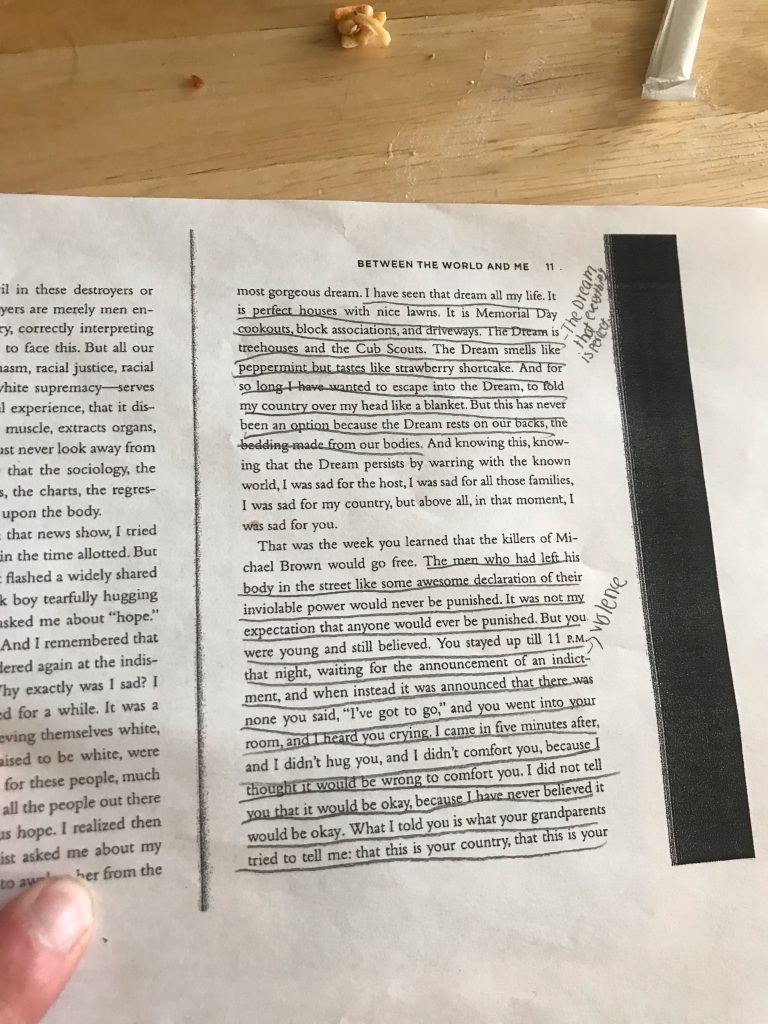 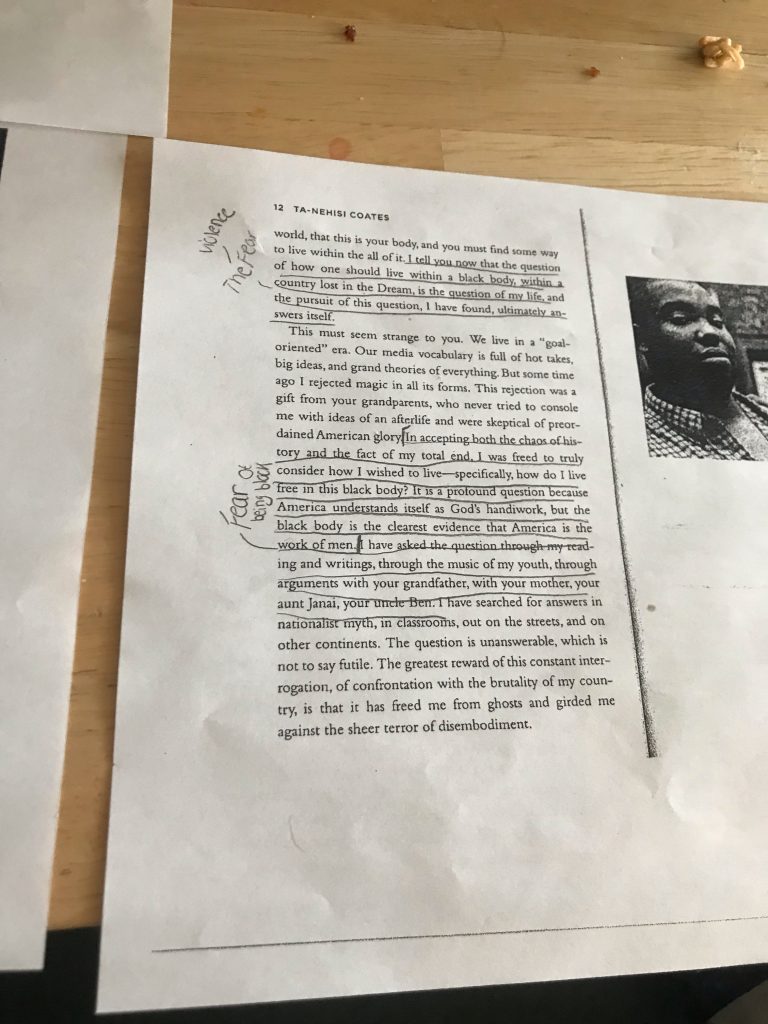 In the writing process I feel comfortable using the techniques I was taught. The process i use for most of my writing is for the part of it when using a reading to write I usually find my quotes that match the essential questions being asked to make sure I follow the prompt. When copying down the quotes using the correct way to put them in the writing. Once the quotes are in place I explain what the quotes mean to me or in the way that the writer wants it to mean. Then go back and make sure the paragraph flows into the quote to make sure the background information is there in order to make sure the reader has enough to understand what the writer was talking about in the reading.  To write my introduction I like to start most essays with a question to create a hook for the reader to be more interested in the essay and want to read more. For most of my introductions I like to base some of my ideas of the form of the intro. When writing I follow TRIAC for the most part when looking at the essays. Usually the form of claim, evidence, and interpretation is how I used to write which wasn’t enough for the essays in college so using TRIAC helps me form a lot better writing. When following TRIAC the one problem I had was making everything flow well and not have a well structure form of transitions. So my essay would come out to choppy and sound not well written at all. When writing the yoshino essay I just wanted to put together my ideas before the actual structure of the essay and that wasn’t a good idea because i started mixing ideas together and it got hard to make out ideas and which quote went with what quote. So on the second revision I focused mostly on rearranging the essay to put everything into the right spots. When all that was done i went to sasc to actually finalize my essay and make sure everything was where it should be. When writing the conclusion I base it off of my introduction. So i take the ideas or questions I had in the beginning or the questions I asked and either restate them or just explain how I answered them.

In life people try to fit in whether it is into a group of friends, to be liked or they change how they dress in order to be cool. In your life have you ever changed something about yourself in order to be liked or to fit in? Why was it necessary to hide parts of yourself or identity? In the writing by Kenji Yoshino he states that the False self is shown when the True self is in danger. The way that Yoshino states this is in paragraph 14 when he says “The False Self has one positive and very important function: to hide the True Self, which it does by compliance with environmental demands.” When kenji says this he means that when in a environment that is unstable or uncomfortable for the True Self the False Self will protect it in order to keep it safe. This can happen to everyone when you are uncomfortable and try to fit in you become someone you aren’t which is the False Self.

Identity comes in many forms it can change based upon many different things. Kenji Yoshino he’s writing this because of the hardships he went through with being gay in a place where it is not that welcome there. One of the hardships that he faces is when he has made himself a False Self in order to hide the real him, Yoshino states when his False Self is show by saying “My gay self, The True Self was hidden behind an ostensibly straight false self. Yet it would be wrong to cast the closest self purely inimical to the gay one. In my adolescence, this False Self protected the True Self until its survival was assured.” This how he kept himself from being hurt or shamed. Did this false self hurt him in the long run? He answered this when he said, “Only at this point did the False Self switch from being a help to being a hindrance. And even after I came out, the False Self never disappeared. It was reduced to the minimum necessary to regulate relations between the True Self and the world.” (Paragraph 16) The False Self is almost a way of being able to fit in and be something your not until your True Self in ready to be seen.  The false self was harder on himself then the true self by itself. When he says it’s a hindrance he’s saying that it obstructed the real him from being able to fully come out.

The other part is the True Self which usually hides behind whatever your hiding behind it also is the real you. The True Self to Kenji is “The True Self is the self that gives an individual the feeling of being real, which is “more than existing; it is finding a way to exist as oneself, and to relate to objects as oneself, and to have self into which to retreat for relaxation.” The True Self is associated with human spontaneity and authenticity: “Only the True Self can be creative and only the True Self can feel real.” (paragraph 13) The meaning of this is that the true self can be shown once you feel whole with yourself or comfortable to be in your own and just be you. When the True self comes out it means that you are finally not afraid of who you are and also want to finally be heard and seen for you and not for the False Self.  Another way that this is stated is when he says “(Here I follow Winnicott, who observes the True Self is not susceptible to specific definition, as its nature differs for each of us.) In talking about classic civil rights groups. I have focused on the demand to conform to the mainstream because I think that for most groups (except women) these are the demands that most threaten our authenticity. But I am equally opposed to demands that individuals reverse cover, because such demands are also impingements on our autonomy, and therefore on our authenticity.” (paragraph 30)  This is the second way of looking at True Self from Yoshino’s eyes when he says the line “is not susceptible to specific definition, as its nature differs for each of us,” he is saying that all true selves aren’t the same because everyone’s different so the true self of someone is their own special person. When Yoshino ends the essay he makes a point to be accepting of your true self and not to hide because it will hurt yourself and cause damage to your well being.

With the way that Yoshino says that ” it is much more sympathetic to “liberty” claims about freedoms we all hold than to “equality” claims asserted by a subset of the population. It is easy to see why. Equality claims- such as group based accommodation claims- inevitably involve the Court in picking favorites among groups.” Yoshino believes that the equality paradigm is better due to the fact that it allows him to show his true self and also being able to show it in public without being judged. “ In practice, I expect the liberty paradigm to protect the authentic self better than the equality paradigm. While it need not to do so, the equality paradigm is prone to essentializing the identities it protects. Under an equality paradigm , if a women who wore a lot of makeup were protected by a court because makeup is an “essential” part of being a women, this could reinforce the stereotype that women wear makeup. But if the same women were given the liberty right to elaborate her own gender identity in ways that did not impinge on her job performance, she would be protected from demands to be either more “masculine” or more ” feminine.” The way that Yoshino is stating that the way that you can get a judged with the way that society is making you conform into certain things thus making it hard to be able to be a women and not wear makeup because the way that society judges women if they don’t. So the equality paradigm is  a better fit because then everyone can live in peace.